Number Of Latinos In Hollywood Films Is Dismal. What Needs To Change? 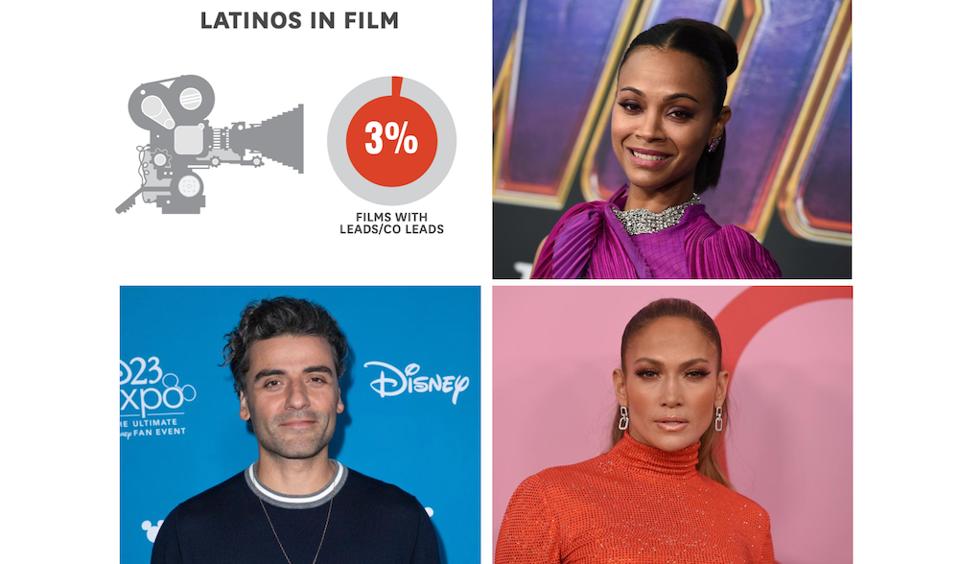 According to the USC study, Latino actors only had 3% of the lead or co-lead roles in Hollywood … [+] films.

It is well known that Latinos, in front and behind the camera, are severely underrepresented in Hollywood films. That’s nothing new. But how bad is it?

Latino actors barely landed 4.5% of more than 47,000 speaking roles in the 100 top-grossing U.S. movies from each of the past 12 years and only 3% were leads or co-leads. The staggeringly low numbers are just as bad behind the camera, where Latino directors constituted 4% and producers just 3%. That’s according to a just released study from the USC Annenberg Inclusion Initiative, which analyzed 1,200 films from 2007 to 2018.

The study, co-authored by Dr. Stacy L. Smith, founder and director of the Annenberg Inclusion Initiative, was conducted with input from the non-profit National Association of Latino Independent Producers, which just celebrated its 20th anniversary, and independent production studio Wise Entertainment, creator of the all Latino hit series East Los High.

The USC data shows that Hispanic audiences continue to be disproportionately underrepresented in Hollywood features, even though they make up about 25% of the annual box office’s frequent moviegoers seeing an average of almost five films a year in 2018, according to the MPAA.

What’s worse, just after the industry started to show very modest improvements over the past decade, the study found there was a drop in the number of Latino characters onscreen in 2018 despite more Hollywood films released last year.

“It’s very concerning,” says NALIP’s executive director Ben Lopez. “The film industry is not keeping up with population numbers. Without executives pushing for more Latinos in the pipeline and greenlighting more of our projects, we won’t advance.”

In addition to the severe underrepresentation, stereotypical and clichéd portrayals of Latinos continue to persist. Among the findings across 200 films from 2017 to 2018, 24% of all of Latino speaking characters were depicted as criminals (mostly gang members or drug dealers) and 13% were shown as poor or from low income backgrounds. When it came to jobs on screen, the majority of Latino characters were portrayed as non-college educated individuals (construction workers, farmers, service personnel) with a meager number of highly educated professionals.

“We’re missing the Latino attorney or astronaut as the hero,” states Lopez.

The lack of Latino directors and producers affects storytelling. The development of more authentic and representative projects and who gets hired could change if there are more Latino behind-the-scenes decision-makers in the industry. The USC Annenberg Inclusion Initiative analysis shows an increase in Latino actors and producers when a Latino director was attached to a film. But breaking into those coveted high-level roles continues to be difficult.

The number of Latino characters go up when Latino directors, producers and casting directors are … [+] involved in a film project.

“It is hard for anyone, of any background or ethnicity,” states Mota. “But for us there is another added layer because of the stereotypes and perceptions around our stories, and types of content we should be able to develop and deliver. Many in Hollywood think “Hispanic” as in “content in Spanish,” which many times limits the types of jobs and projects producers, directors and filmmakers have access to.”

The study mentions a handful of successful Latino directors, including Guillermo del Toro, Robert Rodriguez and the sole female, Patricia Riggen, and for actor leads, only Cameron Diaz, Jennifer Lopez, Jessica Alba and Eugenio Derbez. But there were some glaring omissions, such as Zoe Saldana and Oscar Isaac, both of whom have starred in leading roles in high-grossing box office films.

But there are many more Latino actors who could very capably step into leading roles. Having Latinos at only 3% of leading roles is unacceptable.

What needs to change?

While there are more new faces and names in Latino talent pool, compared to 10 years ago, their visibility is still scarce. And for those who do break through, Hollywood tends to gravitate to them, rather than tap unknown actors, directors or producers.

“Even if the numbers are as bleak as the study shows, it also demonstrates that there is a lot of growth and opportunity for us,” says Mota, who is currently working with Viola Davis and Julius Tennon’s JuVee Productions on a film adaptation of Brazilian playwright Nelson Rodrigues’ 1960 play The Asphalt Kiss.

“Many layers of businesses in the country take us for granted. Hollywood included,” he states. “But now we have the data to propose solutions.”

Some of those solutions are:

Changing casting practices. That includes hiring Latino casting directors and auditioning and casting more Latinos in small roles that can later translate into bigger opportunities. Doing so can quickly increase the number of Latino characters and be more representative of the overall U.S. population.

Building pipelines. Actors – as the “face” of a film – are the most visible. Building an actor pipeline is an essential part of Latino representation in film. But even more so is building a pipeline of Latino filmmakers, who can create, write and produce authentic stories, and directors who can bring them to life.

“It takes a village type of approach to create systemic change,” says Lopez.

That’s where support and mentorship through NALIP’s producer and director incubator programs help. Through the organization, Lopez has been working closely with executives in the industry to help nurture up-and-coming talent. Over the last 18 months, the non-profit helped place 24 Latino creators and filmmaker hopefuls at studios, networks and production companies as part of its efforts to build pipelines that can yield results down the road.

The consensus is that change must occur in the entire film industry ecosystem, but top executives can greenlight projects and make hires now that can impact and accelerate the process.

“We need to eliminate barriers and create our own star system,” says Lopez. “There’s a lot of new hope in the horizon.”