Planned $45M Pulse memorial faces resistance by some shooting victims: ‘They're treating it like a circus’

ORLANDO, Fla. – ORLANDO, Fla. — At 1912 S. Orange Avenue, hundreds of visitors a day pay their respects as rainbow flags dance in the wind.

Some stop by and gaze at the dozens of faces making up the memorial’s bright, colorful walls. Others scrawl messages like “love wins” on the tall, towering sign at the property’s edge — a sign that reads just one word: “Pulse.”

Once a gay nightclub just down the road from Orlando Regional Medical Center, Pulse has been transformed into a shrine: honoring the lives of 49 people killed and another 53 injured after gunman Omar Mateen burst into the nightclub on June 12, 2016 and opened fire as the club celebrated Latin night. 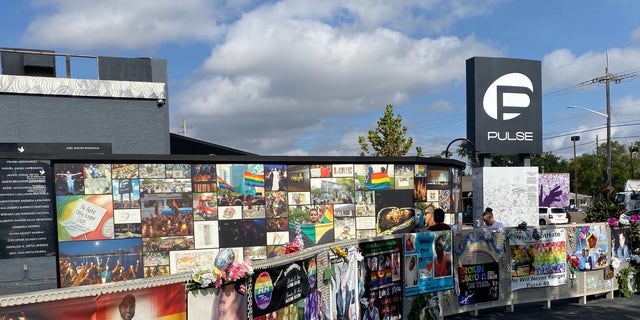 The Pulse Interim Memorial at the club’s original site.

The current Pulse memorial is a temporary one. Barbara Poma, the club’s owner, has since founded the onePULSE Foundation, which is in the process of putting the finishing touches on a $45 million plan to build a permanent memorial.

But the ambitious and costly plan is meeting resistance by some family members of Pulse victims, who feel it’s a tad exploitative.

“It’s obnoxious!” said Christine Leinonen, whose son, Christopher Leinonen, 32, was killed in the attack. “It’s an obnoxious thing to do!”

Her fear is that the project will become just another Orlando tourist attraction, standing in the shadows of the huge theme parks the home of Disney World has to offer.

Leinonen is in favor of a modest memorial that yields individual reflection — not a massive endeavor that she believes will glamorize her son’s death and profit off of the tragedy.

But proponents of the project believe the site of the mass shooting deserves a permanent marker that honors the victims. Poma said that some details still must be fleshed out but the vision would be to build a brand new memorial where the nightclub once stood and a museum just a block away.

“What’s most important is that we make sure what happened here is always remembered. Never erased,” said Poma. “The most important thing we do is preserve that. Preserve the history and the story of those that were not only killed but survived.”

When asked about the accusations made regarding the project, Poma defended the decision to move forward.

“Museums are not tourist attractions,” she said. “They’re educational institutions. And that is what the museum will be.”

Poma said that since the beginning, a primary focus has been to work closely with the affected families. While she acknowledges that not everyone will come to a complete agreement, she claims the majority of families who lost loved ones in the attack are in favor of the project.

That includes Mayra Alvear, whose daughter Amanda Alvear, 25, went to the club that night and never came home. Alvear describes her late daughter as “smart” and “tough” and was looking toward the future with wide eyes.

Conception drawing of the Pulse Museum, slated to open in 2023 (Coldefy &amp; Associés with RDAI/onePULSE Foundation)

“She wanted to find a cure for cancer because my older son died of cancer when he was 11 years old,” said Alvear. “She wanted to do that. And I know she would have done it if it weren’t for what happened.”

Alvear serves as a victim’s liaison with the onePULSE Foundation.

“The Pulse Memorial site, it’s sacred ground. It’s where our loved ones took their last breath,” said Alvear. “It’s a solemn peaceful place where I feel this strong force.”

Alvear said there is ample — if not absolute — support among many of the victims’ families for the Pulse Museum. She’s hopeful that the project, once completed, will not only help tell her daughter’s story but will also spread a message of love.

Mayra Alvear (right) pictured with her daughter, Amanda Alvear, 25, who was killed in the Pulse attack (Photo courtesy of Mayra Alvear).

“It will be a place to honor their legacy. A legacy of love. To educate, to bring people together, to teach each other about our differences,” Alvear said. “The museum is something that is really special. It’s going to be a beacon of life. A beacon of hope. A beacon of learning and changing peoples’ lives and peoples’ hearts.”

But the project has pitted Pulse survivors and family members of those who died against each other. And victims of gun violence across the country have also weighed in.

Leinonen founded the Community Coalition Against a Pulse Museum, which has collected more than 100 signatures from people tied to mass shootings across the county who want the project stopped. More than 30 of those who signed it are directly or indirectly related to the shooting at Pulse.

Michael Morales is one of them.

He was at the club that night with his then-fiance, Martin Benitez, 33. Their wedding was slated to be held in 2018, but Benitez was killed during the shooting.

“I miss him every day,” said Morales. “I have a little corner in my house with his pictures.”

Morales may have survived the attack, but the shooting left him severely injured. He said that later this month, he will be having his thirteenth surgery. Morales said that he would prefer to see the foundation place more of an emphasis on helping survivors.

He, like Leinonen, is hoping to see the victims respectfully honored but also fears the museum will inevitably profit off of the attack. In his eyes, the project, in its current form, has not helped heal his physical or emotional pain.

“Instead of doing a museum and all of these flashy things, tear down the club and do a real memorial,” Morales said. “A place where you can go and think about what happened.”

A conceptual drawing of the soon-to-be built Pulse Memorial which will replace the Interim Pulse Memorial (Coldefy &amp; Associés with RDAI/onePULSE Foundation).

Currently, the onePULSE foundation estimates that 300 people visit the Pulse Interim Memorial each day. Those visitation numbers are expected to rise when the project is complete.

Poma is hopeful that with more visitors, more people can leave with a valuable takeaway. She said organizers hope to break ground on the project in 2021. They’re hopeful the new memorial and museum will be completed in 2022 and 2023, respectively.

“I think coming here,” Poma said, “to see what hate does — but how love wins — can inspire change.”